In the modern professional world, a number of large companies have traded the classic rigid work environment for a more casual atmosphere in the hopes of increasing inspiration and productivity. Employees who were once restricted by highly rigid regulations of conduct and attire have found an entirely new type of workplace appearing on the horizon. Casual and unrestrictive, this new style of work environment is tailor made to increase inspiration, motivation and ultimately productivity in the modern worker. But, will these drastic changes prove effective?

The traditional work environment has typically featured highly restrictive rules, regulations and codes of conduct. This standard workplace atmosphere was considered an integral part of business for a great many years, going back well over a century. The restrictive environment was not simply a byproduct of a rigid business world, having emerged from a need for form and functionality in an already austere culture. The modern office workplace began its long tenure in the 19th century with the introduction of office automation, with the help of such inventions as the typewriter and adding machine. These changes brought about the need for a structured and efficient work environment that, over time, would become a standard for businesses around the country.

There are a number of clear benefits from a stiff and limited work environment. Most importantly, order and consistency are paramount to the running of any major business. Maintaining a reliable chain of command within a workplace allows for systems of information dispersal to function with little resistance. Before computers and telecommunications entered into the equation, there was an immense amount of clerical work that needed to be accomplished by individuals in any given day. The effective organization of this work was critical for any large business to operate. Restrictions ensured that the right amount of focus was spent on a particular task and that the finished work would be ready and available at the time and place it was needed. One analogy that can easily sum up the original office workplace is the very thing that eventually changed it so drastically: the computer. The arrangement of employees in the office, running complex tasks that interdependently rely on one another is much like a multitasking computer running a variety of operations simultaneously. Without order and a certain standard of operation, the goals would be lost in the complexity. The rigid environment was also thought to be conducive to subordination in the lower levels of employment. In order for work to get done correctly and in a timely fashion, it was imperative that the employees were free from distraction and able to stay focused on the task at hand. A rigid atmosphere was thought to help keep employees both on task and in the right state of mind. A certain element of fear was certainly taken advantage of for this purpose which, at the time, was considered a positive motivation tool for employees. This, of course, was the fear of being reprimanded, docked pay, or even being fired for violating policy. Although this method of keeping employees working and on schedule proved effective, it was not without its faults.

The Need for Change

The downsides for the traditional standard of rigidity in the work environment have become much more apparent in recent years. One major downside that has been highlighted by the rapid changes in the culture is that the restrictive environment, that was once found to be beneficial for its encouragement of subordination, was also found to be a major creator of stress in workers.

As the modern work world speedily shifts itself into the online work world, the abilities to innovate and implement new ideas become increasingly more necessary at an alarming rate. Therefore, creativity and inspiration have become more important in the workplace than ever before. In this ever changing business world where innovation is king, stress has proven to have an increasingly devastating impact on motivation and productivity. As a result, some major players in the online business community have taken drastic measures to increase productivity and inspiration in the workplace. Using the term ‘casual’ in the context of an office or workplace brings to mind old standards such as ‘casual Friday.’ The modern changes taking place in creating the new ‘casual’ work environment have taken the meaning to a whole new level and are nothing short of revolutionary.

The Workplace of Tomorrow 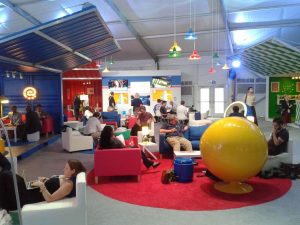 Beyond the encouragement of dressing casually in the workplace, some corporate powerhouses have implemented some surprising changes in their company’s work environments in the hope of increasing productivity. Many of these changes seem to focus on making the workplace more enjoyable and relaxed. These changes alone appear to have been used to directly combat the stress associated with the old standard in workplace atmosphere. For example, Google provides beanbag chairs used for workstations and O’neill allows workers to skateboard down the aisles of their office. One of Google’s principle philosophies is “you can be serious without a suit,” which, along with their office’s ping pong tables, video games, and ‘huddle’ break rooms, clearly demonstrates their commitment to creating a low-stress work environment. Another great example of an internet giant who has adopted the new relaxed work atmosphere is Facebook, whose headquarters office includes lounges, kegs, turntables, and an outdoor skate park. Still another great example is the video game monolith Electronic Arts whose campus in Vancouver sports a theater, fitness room, coffee bars, restaurants, and a full soccer field. While the more dramatic changes are usually only found in very large and successful companies, a number of smaller companies have begun to model their example. Eliminating overly restrictive dress codes and incorporating video games into break areas are a couple of ways that smaller companies have begun to bring these innovations home.

In stark contrast to the stiff work environments found traditionally within the office world, these modern game changers have found a powerful strategy for motivating their employees through a more relaxed and enjoyable workplace. It’s fairly clear that these changes would make work a much more fun process for those who are fortunate enough to work for these companies. Therefore, it’s not a great leap to imagine that these employees have a higher motivation to keep their jobs and impress their supervisors. The old model seems to function on the archaic idea that negative reinforcement is a more effective tool, while modern psychology clearly demonstrates that positive reinforcement is a superior motivator. It’s the old question of ‘the carrot or the stick’, and it appears that modern companies are more frequently giving their employees ‘the carrot.’ Judging by the success of these companies, it doesn’t seem like much of a risk to assume that their methods are bringing the desired results.

For the modern workplace, it seems clear that a more relaxed environment would be more effective for overall productivity. However, even though perceptions and expectations have changed dramatically in recent years, there is no substitute for structure and efficiency. In summation, it would seem that as long as each worker has a clear set of goals outlined for him or her, eliminating or minimizing stress in the workplace has the potential for increasing productivity on a grand scale.