It’s nearly impossible to live your life without experiencing some form of failure. At some point if your life, you have more than likely failed at something. You can try to live cautiously and do only what’s necessary to avoid the risk of failure, but in the world of Lean, that is failure. 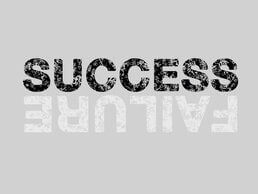 To be great you have to take chances, you have to think outside of the box and be willing to accept the fate that comes with it. The path to continuous improvement does not come with Google Maps for you to set your cruise control and relax. It takes a progressive mind that does not fear failure, but instead, sees it it as an opportunity to improve.

Fearing failure can put up serious roadblocks in your progression that are often hard to overcome and cause you to miss great opportunities along the way.

Signs of Fear of Failure

These are some common symptoms of having a fear of failure:

Granted these are all cases that could be considered rare and extraordinary examples, but the point is they all fought through failure to achieve greatness. They didn’t accept failure as the end all, instead used it to motivate and educate themselves to achieve what they really wanted.

One of the biggest life changes you can make in your work or home life is to start accepting failure as a great learning experience, rather than the end all. Everyday you fail at something. Maybe you were a couple minutes late to work, or you forgot to substitute something in your lunch order, heck you may have even forgot to pick up the kids from soccer practice. The point is, these things happen and rather than see them as failures in your day, use them as learning experiences for tomorrow.

These may seem like small insignificant things to learn from, but for those that fear failure in the workplace, recognizing and learning from small failures like these can help you start to overcome your fears.

Tips to Overcome a Fear of Failure

Buckminster Fuller is a renowned American philosopher, architect, and inventor. He owns 28 patents, authored over 30 books and has received more than 60 honorary degrees. He has been considered the father of American landscape architecture and once said this regarding failure: